He was born in 1314. For reference, Francis of Assisi was born in 1182, so about 150 years earlier. However, contemporaneous with Sergius in the Western church were such figures as Julian of Norwich, who was born in 1342, so they would have overlapped (though not known each other). Meister Eckhardt was (and still is) a well known German theologian and mystic who died in 1327, when Sergius was 13 years old. Gregory Palamas was a famous theologian from Greece, who died in 1359, so, again, overlapping. Dante Aligheri was around. He died when Sergius was a boy, in 1321. Almost an exact contemporary of Sergius was John Wycliff, English theologian, philosopher, and most famously to us today, Bible translator. He translated the Bible into English, and in this and many other ways was an early Reformer. He attacked the authority of the clergy, abuses of power in the church and papacy, and many of the things slightly later Reformers like Luther would pick right up.

So the 14th century was an active, incredibly fruitful century in the church overall. Sergius was far removed from much of this, although as a monastic he probably did receive writings of some of these Western figures, he probably has some sense of what was going on – the visions of Julian, perhaps, and the complaints of Wycliffe. He must surely have at least heard of Dante’s Divine Comedy, with all the scandal it created in consigning powerful people to hell. Your average Russian peasant or even perhaps nobleman would have had little idea of all this, but again, as a monastic, Sergius was far likelier than many to know what was going on in the wider world.

He spent his entire life right around Moscow. He was raised in Rostov (north of Moscow, on the Western side of Russia). After his parents died when he was a young man, he and his brother, a widower, went into the woods and set up a kind of home/monastery there, which grew very quickly and attracted other students. This became the monastery for which he’s known; in fact, it is still there today, and an important Russian pilgrimage site (it’s in Rodonezh, known as The Sergian Monastery of the Trinity).

12th century Russia saw a lot of invasions by the Mongolians, so the 13th century was a period of rebuilding, and Sergius was very much a part of that. His monastery established several monastic schools. It also became a center of missionary activity. They founded many additional monasteries in that part of Russia (as many as 75, so they would have made a big contribution to the cultural growth and recovery of Russia at that time).

Sergius also taught local peasants how to cultivate their land and was known by them as a generous, hard-working and gentle man–hence his association with St. Francis. He didn’t leave any writings, but he left a monastery that still exists today (and that’s pretty amazing), and countless contributions to Russian culture that we probably can’t even begin to quantify.

The world is vast, the arc of history long, and today’s troubles will soon be buried by tomorrow’s. AND great figures always rise up in troubled times. So a trip back to the 1300s is a welcome reminder that life marches on. Today we give thanks for Sergius of Radonezh. 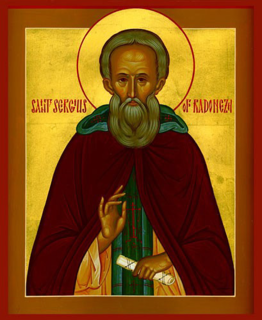 So… it has been a rather dramatic couple days in politics, hasn’t it? I have to say I was a bit relieved to see that today’s saint takes us back to the 1300s, to a time not without problems of its own, but faraway problems both in distance and in time.

St. Sergius of Radonezh is our saint for today. He’s been in the calendar of saints for about 600 years and is shared by pretty much any church, East and West, that observes saints’ days. Also a needed respite from these times we’re living, Sergius was known as the Russian St. Francis, a gentle, humble, generous soul.