The Short Long Life of John the Baptist 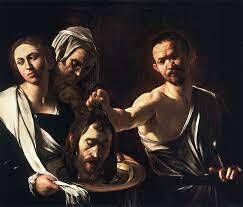 For an Audio Version of this Sermon, Click Here.

Ah, nothing like some light summer reading – John the Baptist.

The first opera I ever went to, in Chicago when I was a pre-teen, was (of all things) Salome by Richard Strauss. Salome is the name that tradition gave to the girl who asks for John the Baptist’s head in today’s story from Mark. My mother took me, and I’ll never forget the look on her face when Salome, in the second act, began her “Dance of the Seven Veils” – seven veils that rapidly dwindled in number.

That memory came back to me last week (before I knew this was our reading), because my own daughter was paging through a book on Western art when she came across none other than Caravaggio’s painting of Salome holding the head of John the Baptist on a silver platter. You can’t shield kids from the Bible forever, I suppose!

This is a strange story, nestled here in Mark’s Gospel between Jesus’ visit to his hometown and the Feeding of the Five Thousand.

Matthew tells it, too, in his Gospel, and it’s very similar to this one, though he (Matthew) lays less blame on the women in the story, Herodias and her daughter. That’s a peculiar feature of Mark’s account. This is also one of the few Biblical stories for which we have a corroborating outside source. The Jewish historian Josephus, who wrote in the second century, tells it, too. So John the Baptist was well known, enough to have been included not only in our Bible but in other historical accounts, as well.

Who was this John?

Luke’s Gospel tells us he was the son of a Jewish priest, Zechariah. Zechariah’s wife Elizabeth was the cousin of the Virgin Mary. What we call “The Visitation” was Mary’s visit to Elizabeth when both John and Jesus were still in utero. John leapt inside the womb when Mary and the unborn Jesus approached–his first prophetic act. Precocious kid. There’s a popular Greek icon of the two inside their mothers’ wombs, greeting each other with the sign of peace.

Whether or not any of this is historically factual–and I’d say, probably not–we’ll likely never know. But this intertwining of these two men’s lives from before they were even born is a reminder, if nothing else, that Jesus didn’t come out of nowhere. No one does. He was shaped by people who led the way, with their knowledge, passion and conviction. John was one of his forerunners.

The next time we meet John in the Gospels he’s baptizing the adult Jesus in the Jordan River. Not a “Christian baptism” like we know it today, but something more akin to Jewish purification rituals. After that, we encounter John when he’s in prison for (as we learned from today’s story) speaking up about Herod’s illicit marriage.

We meet John for the last time in today’s story. Herod is the son of the Herod we know from the Christmas story. Sources outside the Bible have little good to say about the family. This Herod ranks with the soon-to-be-born Nero in tyranny and capriciousness. John wasn’t the only one to publicly denounce him. But something about him frightened Herod enough to put him in jail and then, eventually, have him beheaded.

Scholars think the early Christian movement had to work hard at suppressing John’s disciples. There’s evidence both in the Bible and in Josephus’ history that John’s was almost a rival movement to Christianity in the early days.

And John hasn’t been one to disappear into history. You can’t travel in Europe without coming across something–a shrine, a chapel, a relic, loads of art–dedicated to John. By my rough estimate, the number of body parts that reside in chapels all over the world would add up to about five John the Baptists–with an excess of fingers and forearms.

He appeals to us the way that prophets, truth-tellers, witnesses, those who speak up when so many of us remain silent time and again, appeal. The Kings, the Gandhis, the Gretas (the Swedish girl so passionate–and rightly so–about climate change), all dissidents, writers, protestors, truth tellers … those in whom courage seems to be concentrated, while in the rest of us it tends to run a little thin.

Some are called to be that, always, others maybe once or twice in a lifetime.

All of us are called to listen. And to consider. And to protect the courageous prophets who live today No less than when John graced us with his brief, but transforming, life.